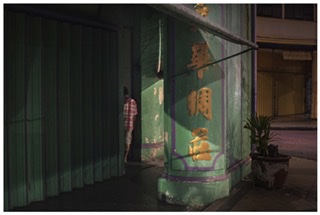 Street photography has a long and rich history that we might say has its genesis with Magnum co-founder Henri Cartier-Bresson who in the 1930’s championed the seminal concept, ‘the decisive moment’ and in so doing set an early precedent for the collective exploration of the street.

While the meaning of street photography has evolved over the decades with new technologies and approaches, the artist feels personally that it still offers the most profound way to test one’s ability to dance the photographers dance. What he mean by ‘the dance’ is that he believes one needs to be nimble enough in mind and body to capture compelling images that are forged out of the random chaos that is the street.

An example of this is evident in the work he has presented for Open Studios Penang.  He wanted an excuse to explore George Town, but not to merely wander around and collect random visual vignettes of a picture postcard perfect heritage listed historical town.  He wanted to have a theme in his head that would force him to look at GT differently. He chose ‘film noir’; ‘a style or genre of cinematographic film marked by a mood of pessimism, fatalism, and menace’.  With this in mind, he took to the street, and let reality offer up what was needed to allow him to complete his vision. A vision which he hopes is evident when you look at the work presented.

He regards his vocation to be a hybrid of social documentary & destination driven essay, with a flair for creative and visually compelling corporate, industrial and advertising photography.

Now in his 30th year as a professional, Richard has fulfilled many of his photography ambitions. He divides his time between Penang, Hong Kong and Johannesburg, South Africa.