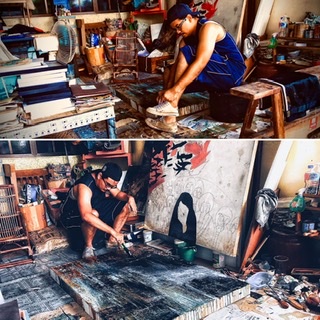 Maizul opened his MySole Studio in 2014 (MySole is pronounced the same as Maizul). As a visual artist, graphic designer, and theatre practitioner, this is his PLAY-ground working space.

Maizul graduated from USM Penang’s School of Arts with a degree in Graphic Communications in 2005 and a Masters in Visual Arts and  Design in 2011 school of arts. He won Best Sculpture award in 2001 in the Penang Young Artist Competition and was a semi-finalist in the Malaysian Emerging Award in Kuala Lumpur in 2009. In 2016, he was shortlisted for the 2016 UOB Painting of the Year Competition. He has had three solo exhibitions in Penang. He is also very active in the Penang and Malaysian theatre scene, and has participated in theatre productions as stage crew, actor, artistic stage designer, stage manager, director, producer and theatre advisor. He won Best Supporting Actor in the Penang State Theatre Competition & Malaysian Festival Theatre Competition in 2003.

He has performed with an international art group called ARTism, a collaboration between various artists from Indonesia, Singapore, Malaysia, and the Philippines) and was one of the artists representing Malaysia in the International Art Festival Jogjakarta, Indonesia in 2014 and 2016.  He currently works as a Lecturer in the Mass Communication Department, UOW Malaysia KDU Penang.

You can meet Maizul and see him work in his studio-playground April 3rd-5th 1pm-6pm.