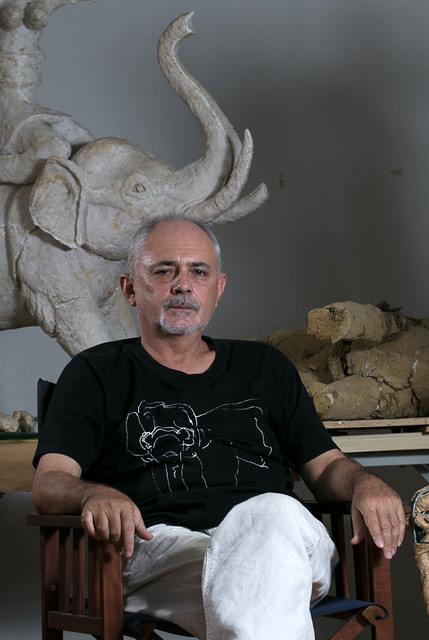 Make a simple elephant using your hands with clay. Develop awareness of the necessity of respecting and protecting Asian elephants, which are in danger of extinction.

Free of chargeOpen to anyone on Friday and Saturday. Children’s day on Sunday.Space is limited so please let us know which day and how many of you would like to come.Expectation/ResultAll participants get introduced to basic clay modelling and produce a clay elephant, which will be exhibited until the end of the workshop. Artist MentorGeorge Burchett, born in Hanoi, Vietnam in 1955. Graduated with Masters Degree in mural art from the Fine Arts Academy in Sofia, Bulgaria in 1974. Has lived and worked as an artist in Paris, France; Sofia, Bulgaria; Sydney, Australia. Has exhibited and completed corporate and public projects/commissions in Paris, Sofia, Sydney, Melbourne, Hong Kong, Singapore, Kuala Lumpur, Shanghai, Hanoi, Hoa Binh. Now lives and works in Hanoi.Originally, the artist hosted this project in Vietnam but his concerns about the elephant in Vietnam apply also to the shrinking population of elephants in Malaysia.“My current concern, as an artist and as a citizen of the world, is how to protect our natural environment. By ‘natural’, I don’t mean only ‘nature’. I also mean traditional cultures, national customs, all the things that make a people and an individual unique. Every Vietnamese, old and young, is familiar with the image of the elephant as part of the history, legends, the spiritual and cultural identity of Vietnam. But not too many people are aware that the elephants in Vietnam are on the brink of extinction. Their disappearance would not only be an ecological disaster – for Vietnam and the world – but also a tragic and irreversible loss to Vietnam’s culture and collective identity. Elephants played an important role in Vietnam’s long and heroic history of defending the country against invaders. Now is the time to repay the elephants by treating them with the respect due to heroes and war veterans.”